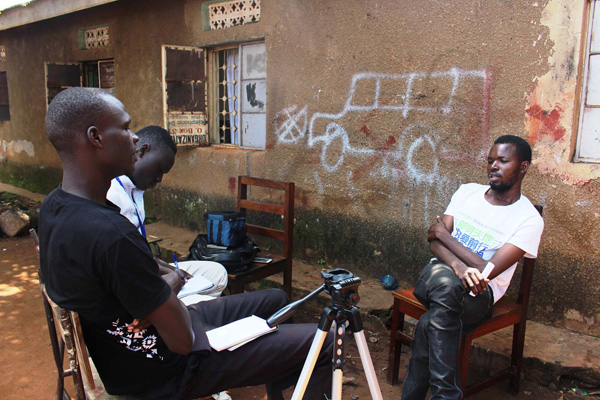 Three youths from Gulu, Philip Odhiambo, Santos Ocaya and Irene Lanyero had no lucrative business before attending an internship programme with CEED Uganda. Today, the trio runs a waste management project called ECO Door, where they recycle fabric waste. Although this has become their day-to-day job, they also believe the project is helping the community in conserving the environment.
For instance, Odhiambo says, their business is saving the Gulu environment and will soon start creating jobs for more youth in their community.
According to population estimates, Gulu District has more than 146,858 residents most of them youth and unemployed. Towards the beginning of the year, United Nations Population Fund (UNFPA) released a report indicating that at least 1.2 million youth in Uganda between the age of 15 and 29 are idle and do not do anything for a living.
The report published in November 2018 shows that the increasing youth unemployment in Uganda which now stands at 6.5 per cent, is mostly attributed to the mismatch between skills obtained in Uganda’s education system vis-à-vis what the job market demands.
Nelson Onen Mandela, the brain behind Belcom Welding Plan, is another beneficiary from the CEED internship programme in Gulu. Onen says although he had some skills, the series of trainings by CEED interns nurtured his passion and money saving skills.

The rewards
This year, three groups of youth clubs in Gulu where awarded Shs3m, Shs2m and Shs1m respectively after pitching successful business ideas that change communities by saving the environment and creating jobs.
The ideas were part of a number of programmes organised by internship students under Youth Entrepreneurship Programme (YEP) and mostly students from Gulu University came to the forefront in the pitching business competition.
Ideas were birthed following an intense training by internship students from CEED-Uganda including mushroom farming, fruits salads making and metal welding and fabrication which won the Shs3 million prize.
Bernard Loum from CEED Uganda says that interns identify 10 youth groups (50 young entrepreneurs) every year who go through a rigorous training programme and case competition to access start-up capital.
“The youth are then supported through workshops, mentorships, and technical backstopping during the course of their ventures,” Loum adds.
Hawa Keita, 25, the French-Canadian executive director of CEED Concordia Uganda, says internship students from Concordia University under their umbrella body called Concordia in Canada together with Ugandan students chose to contribute to sustainable community projects in northern Uganda for a three-month internship during the summer semester.
“Our work is based on the positive attitude of young people. We see youth as change agents in their communities,” she adds.
The initiative that was started by two Concordia undergraduate students Awel Uwihanganye and Peter Schiefke seeks to rally the youth to foster community engagement through skills development and information sharing.
Since 2006, the organisation had more than 350 Canadian and Ugandan students. Hawa also revealed that with the help of interns, the youth in Gulu have managed to plant more than 100,000 trees in an annual arrangement dubbed Gulu Go Green. Here the youth hold a marathon to respond to the indiscriminate cutting of trees and to raise tree seedlings to be planted by young people in their schools and other parts of the community.

Saving the environment
She adds that this year, more than 700 runners participated and CEED was been able to acquire 10,000 tree seedlings to plant. And so far the interns alongside students have planted approximately 5,000 Trees.
“The Africa of tomorrow depends on our capability to make it a better place than it is now. And it all starts with young leaders,” she says.
Hawa also says that with communication being the key in developing communities, under a programme called Youth Advocacy and Communications which intends to respond to Social Development Goal5 on Gender Equality, the project offers an opportunity for young people to share their experiences.
“They talk about the issues that affect them while inspiring and motivating other youth in the community. We host a monthly youth radio talkshow called, ‘The CEED Young Achievers talkshow’,” she reveals.
What they say
“We have learnt that the future belongs to the youth, we have been taught how to handle finances and we have acquired entrepreneur skills.”
Nancy Akello Okeny, student
“People are passionate about what they are doing. These are not only businesses, they are businesses that have a positive impact on their community”